You are here: Home/Blog/Breed Information/Puggle Dogs – Are Designer Dogs Worth the Hype?

Puggle Dogs – Are Designer Dogs Worth the Hype?

Puggle dogs are considered hybrids. This basically means they are a cross between two different purebreds. In the Puggle case, this would be a Beagle and a Pug. The Puggle can also be referred to as a crossbreed, even though this term can also refer to a mongrel – a dog that has only one known purebred in their genes.

Unlike mongrels or mutts that are usually the result of an unintentional crossbreed, hybrid dogs breed, whether they began as mutts or not, is purposely bred to create a specific breed type. Hybrid dogs like the Puggle are known as “designer dogs”. Designer dogs are popular hybrids that have been purposely created using two specific purebred dogs.

Of course, not all “designer dogs” are bred for the purpose of suiting the latest fad. The Labradoodle is a good example of this. Unlike breeding a Beagle and Pug for fashion, a Labrador and Standard Poodle were initially bred to create a hypoallergenic guide dog. In other words, the original cross breeding that resulted in the Labradoodle was intentional, and is still trying to be perfected so it can be recognized as a purebred dog.

Although most hybrids are selectively bred to create a breed that features all of the great characteristics of its two parents, sometimes there is no actual thought process in the creation of such breeds. For instance, although Puggle dogs are very sweet and sociable dogs, they were bred for no other purpose than to be a family pet.

They are not hypoallergenic and they are still prone to Pug breathing problems, which can be made worse because of their love for hunting that has been passed to them through their Beagle genes. For reasons such as this, many purebred breeders argue that designer dog breeding is irresponsible.

Despite what some breeders may think, the fact of the matter is that hybrid dogs are very popular, and often make excellent family pets and generally tend to be very healthy and happy breeds.

It is also important to point out that a hybrid dog is not considered a “true breed” due to the fact that they don’t have an official breed standard. For this reason, they are not recognized by any national kennel club. In addition, not being a true breed means that each Puggle litter produced will be different each time.

Nonetheless, even though Puggle dogs may not have a “true” standard to their name, the fact remains that this special hybrid is in high demand, and is loved by many. After all, who says a dog needs an official standard to be considered a great pal and a one-of-a-kind friend. 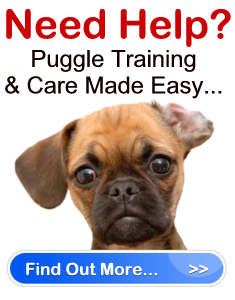